To bring you the inside story of what we're up to each month, we have started a blog.

Call back regularly to read the latest instalment… 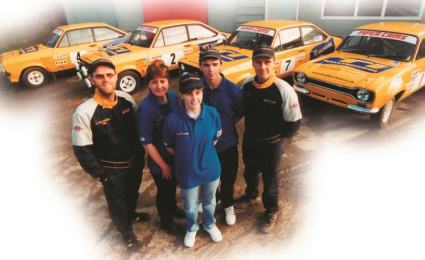 The days all went well, lots of happy people. The cars ran great just a couple of punctures. Mick has taken all the Quaife gearboxes out and rebuilt them. On one of the days was Andy Duckett, back after 18 years. Jamie his son wasn’t born when Andy last came. Another guy taking part who’s daughter was a British Autograss champion. One of the women showed us a picture of her MKI RS2000 from when she was younger. Bet she wished she had still had it. All the cars ran well. A warm day making it hard on the cars.

My first Neuro scientist to instruct the other day. After the school days we rebuilt all the front suspension on the cars. We also had to replace a seat runner. They take a lot of stick. We modify one from another car and that works well.

Great result the other week on the Flying Fortress stage for Dave Longfellow and Dan Ward. Both have been to T.i. Rallyschool. Also Mick Pickles and Bev Warren, first in class. Also have Dave Hornbrook 5th overall on the Phoenix stages. And 2nd overall on the Twyford Wood stages, Mick also did the Twyford wood stages in the Escort. Not driven a stage rally for seven years, spent the day before rebuilding the gearbox. We went down the night before to have a look around. A bit rusty first stage. Craig Burgess navigated so they had never sat together before. Second stage was 1st 2 wheel drive, so over the moon. 3rd stage the halfshaft broke so game over but they loved it.

The other week Charlie Gabb (a rally driver from York) brought the guys from the Motorist hub in Sherburn in Elmet. A brand new place where you can look at some lovely cars, have something to eat and have your car worked on. Also you can just call in with your classic car, so call in and have a look.

Opened the garage door and the deer were walking through the compound. Normally only see them in winter so it was a nice surprise. Different story, near the gate a lone deer which may have a young one ran at the dog and headbutted him knocking him over.

Great result for George Hewick who came to the school a few years ago and went away and built an Escort with his dad Tom. 10th O/A at Greystokes rally. Results getting better and better.

School cars all steam cleaned and on the ramps. Limited slip differential rebuilds this week, and as always full spanner check. All the days seem to be hot, the same as last year so hard on the cars and the drivers.

Owen (our 12 year old nephew) had a great result on Scarborough Auto Grass meeting. Three 2nd places so well happy with that.

First for us a stag do on the morning of the wedding. Some of the guys had flown in from Australia, they all loved it.

On one of the T.i. Rallyschools course days mixed in with the spectators was someone we had not seen for about 30 years. Bob Morrow which was a big surprise. We sort of sponsored him in his Talbot Sunbeam and Escort on road rallies. Great driver and a good laugh. Also Paul Bramley who has had success 4 x 4 off roading who came with his dad and ex rally driver.

Rob Ineson who worked on Aircraft at Lynton On Ouse told us it was closing. Stefan Broughton ex road and stage driver did the school. He used to navigate for Dave Boyes in ex Alan Larkin MKI Escort. Also Pete Slights and I think Ivor Ingham. There also Alan from Scotland and Dave who was looking to buy an Escort. Days hot and wet but great fun. It can be just as slippy in the dry with the dust, like driving on sand.

Sounds boring but the van is in need of a service and front bearing needed replacing. So now that’s sorted the cars all need steam cleaning before they can be serviced ready for the next school days. They do seem to spend a lot of time on the ramps but it’s the only way to keep them reliable. Little job this week fabricate a new centre console for one of the cars.

Here’s a story for you. A guy came to the school a while ago, asked him for any good stories. He said he nearly didn’t come to the school. He said he was an electrician and the other day he had just stepped out of a hole when the water main lid blew off. (Lucky fellow) He had a good day with us.

No emails this week. BT messed things up again but all working now.

We are thinking of selling our Honda Pacer off road Karts as we no longer use them. I remember going to pick some parts up from Honda in Hull, when we got there they started getting all these boxes out and gave us a bill for thousands. Can’t remember which part we had ordered but it was only one. They had mistakenly ordered 100. Oops!

Just found out from Mark Sand who runs the Hull Motor show that it has been cancelled. (Mark came to the school a few years ago and has since started rallying again). So nowhere to give the 6R4 a run out now. Will have to look for somewhere to run it but not on a timed event. Don’t want to damage it.

The other week an old mate Steve Preece brought his two daughters over for a ride in the T.i. Rallyschool cars. Steve had a nice Escort MII similar to the school cars which he used to bring out for one or two rallies a year. He sold it and bought a nice VW camper van.